Online retailers fight a permanent battle for revenue. Yet site monetization, with its ability to serve ads on one’s website, proves a tantalizing new path to growth. With all that juicy, first-party data to play with, it feels like a much sought-after win-win! Brands enjoy increased exposure; Retailers capture more ad budget.

Let’s pause on Amazon for a minute. Though lagging behind the other two in terms of revenue share, no Western rival matches it in the retail sector. The Amazon Advertising Solutions team can thank its Sponsored Product Ad offering for most of its staggering profits [88% of them in Q2 of 2018], a format we’ll use as our cornerstone for the rest of this article.

Sponsored Ads offer a seamless experience. Unlike their forebears they boast a native look and feel – crucial when integrating third-party information. They ensure greater relevancy and, in short, offer the best value for publishers and vendors alike.

All Sponsored Ad programs operate via programmatic auction, with every search triggering advertised products in addition to organic equivalents. Ad placements can render on both product and category results pages. Shoppers might see them via carousel, horizontal strip, vertical sidebar, or a combination.

Now we’ve reminded you of what Sponsored Ads are and how they work, it’s time to assess the two approaches to monetizing your site.

We already touched on one network model – Amazon. However, given its distinct features [it operates within its own ecosystem, delivers its own reporting and defines its own ad experience] we’ll examine the mega-platform’s pros and cons in a separate feature.

Many publishers look to third-party ad brokers like Criteo to conduct vendor transactions on their behalf. Partner with one of these platforms and you’ll join a large aggregate of other publishers. Your inventory contributes to a wider realm of ad space made available to all participating vendors.

Most of the heavy lifting falls on your wholesale brand partners. It’s they who program campaigns using the network’s campaign management toolkit. It’s also up to them to establish campaign parameters, after which the publisher inserts all relevant tags into their pages.

Trust and integrity remain vital to successful business transactions. But publishers and their vendor partners enter network-run auctions at a disadvantage. For a start, brands have zero visibility of the publishers they’ll be buying inventory from.

As a publisher, this translates to lost opportunities. In a network model, your inventory can attract a level of prestige concomitant with higher CPMs. By being tarred with the same brush as less valuable competitors, you lose out on premiums your ad spots may otherwise have commanded.

• A complete lack of control

Control – or lack of it – remains a big disadvantage with ad networks. In every case, they decide the delivery of ads on your website in exchange for a percentage of overall spend. You may be promised a healthy fill rate, but a higher degree of variability still remains. 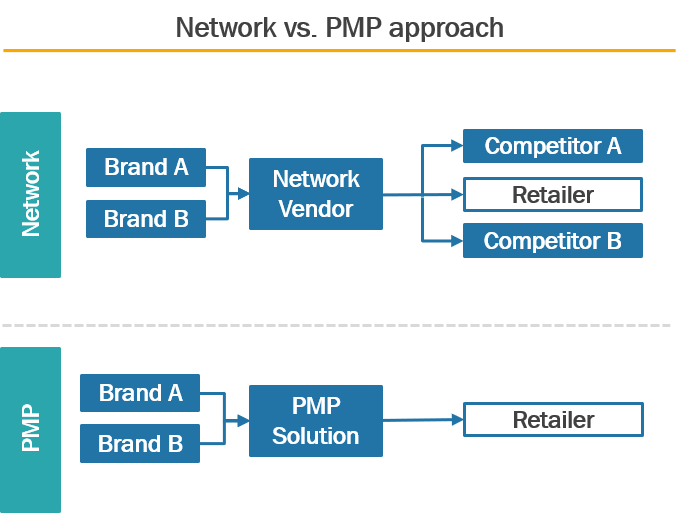 In a network model, brands spend their Sponsored Product budget on a network of different retailers. As a retailer, you rely on a third-party sales force, and can’t claim any exclusive budget from partners. Convincing brands to invest in retail media benefits competitors at the same time.

In a PMP model you can sell media directly to your brand partners. Brands see this partly as a media play, and partly as a way to build a strong relationship with you.

Most of today’s retailers already have a PMP in place, or are considering adding one to their network approach by assigning additional ad swim lanes.

Are some PMP solutions better than others? Actually, yes. Just like networks, most PMPs keep the control over ad placements. Your superior knowledge of the products you sell and audience that views them matters little. Without an ability to dictate relevancy scoring, you can’t influence the outcome of which ads show where.

Relying on PMPs as the sole catalyst for Sponsored Ads protects one-on-one vendor relationships. But does it maximize revenue potential? Unless you’re blessed with infinite resources and a healthy list of suppliers, true scale can prove fiendishly difficult. Many publishers now combine both options, running PMPs and network auctions to populate ad placements simultaneously. This dual approach makes for extra revenue opportunities. However, it also triggers new problems.

Every ad network a publisher works with requires its own dedicated ad placement; and these groups of individual ad units render via their own blocks or “swim lanes” on a retailer’s website. Things become expensive, inconvenient…and incoherent. Not only do publishers end up shelling out for multiple ad placements; they must accept that each swim lane stays locked into service with a single demand source. 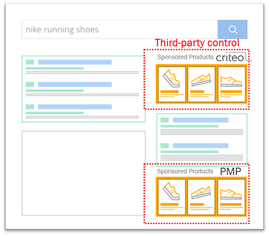 The headache caused by running separate swim lanes has led to a new paradigm in Sponsored Ad programs: consolidating different ads into a single stream.

As a publisher, blending PMPs and network ads into unified ad placements streamlines proceedings without screwing up user experience. In recent times, a waterfall model represented the best way of doing this.

Apply the right rules and you could easily preference PMPs – and lean on network-driven ads only when those from the former are unavailable.

But even this fails to ensure the best possible outcome. Though PMPs provide better value overall, network-driven ads can still generate bigger CPCs in some instances. Waterfall mediation fails to account for this scenario – leaving money on the table for publishers, yet again.

At Crealytics, we surveyed hundreds of retailers to discover how best we could help them reach the next level. It resulted in an SPA program that empowers publishers through greater control, transparency and choice. We’ll drill deeper in a separate post, but you can check out three key advantages of our alternative below.